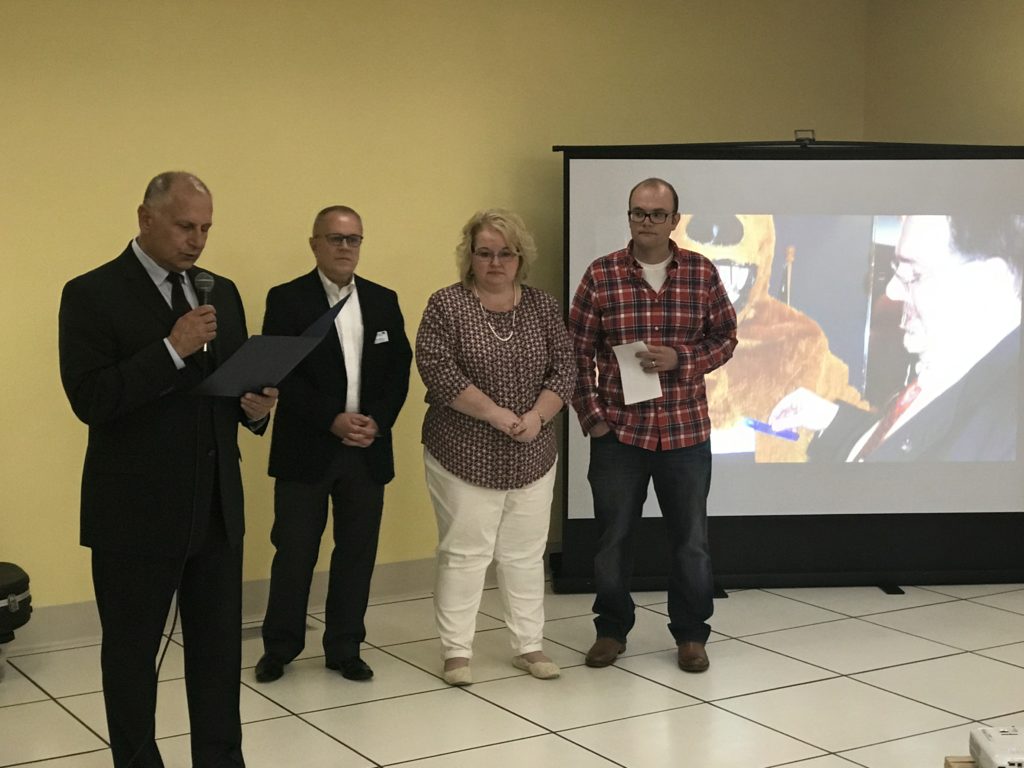 MILTON – The Central PA Chamber of Commerce recently created a training center at its building and named it after the late Bruce T. Smith, Jr., who served as President & CEO up until the time of his death on May 6, 2017.

“The Smith Room” was dedicated at 6 p.m. Tuesday, Sept. 19 during the annual Member Appreciation Celebration, an event Bruce started when he became the Chamber chief in 2014.

Upon entering The Training Center, visitors will see a picture of Bruce with a plaque hanging below. It reads: “This Training Center is in Memory of Bruce T. Smith, Jr., President & CEO of the Central PA Chamber of Commerce from January 2014 until the time of his death on May 6, 2017. The concept of this room began under Bruce’s leadership, and it exemplifies the desire he had to see people reach their potential. Bruce always said he was “Living The Dream,” and part of that dream was uplifting those around him.”

Around 175 people attended the Member Appreciation Celebration Tuesday evening and admired the newly renovated space that is nearly 1,000-square-feet in size. It will be the location of future Seminar & Training Series and Building Leaders for the Susquehanna Valley classes, as well as future trainings that are already in the development stage. Central PA Chamber members will also have the opportunity to utilize the space, just as they do now with “The Ross Room,” which Is also the Chamber boardroom.

“The Smith Room is on track to become a well-known and well-used space where people can grow their skills and learn new things,” said Jeff Shaffer, the Chamber’s Communications Director. “Bruce would be very proud of what this under utilized area of the building has become. The staff is very thankful the board had the same desire to turn the room into something special.”

The renovations were done by T-Ross Brothers Construction, Inc., Montandon. Signage around the door was made by Middle Creek Signs, Beaver Springs. On Fire Promotions, Lewisburg, made the plaque below Bruce’s portrait.

“Bruce Smith was a great leader,” said Dale Moyer, Interim President/CEO and Board Chairman, during the dedication. “Bruce cultivated the positive qualities in others and provided support and guidance to family, co-workers, Chamber members and the entire region.

“Bruce wanted to make a positive impact on this Chamber, and one of his passions was learning. He had a vision of making the Chamber a training center to help cultivate future leaders in our community. That vision was incorporated into the Chamber Strategy before his passing, and tonight we are here to help bring our vision one step closer to reality.”

The dedication also included a proclamation from U.S. Congressman Lou Barletta, read by his District Director Conrad Falvello. Following the room dedication, a balloon release organized by family and music was held outside.

(Written by Jeff Shaffer, Communications Director for the Central PA Chamber of Commerce)